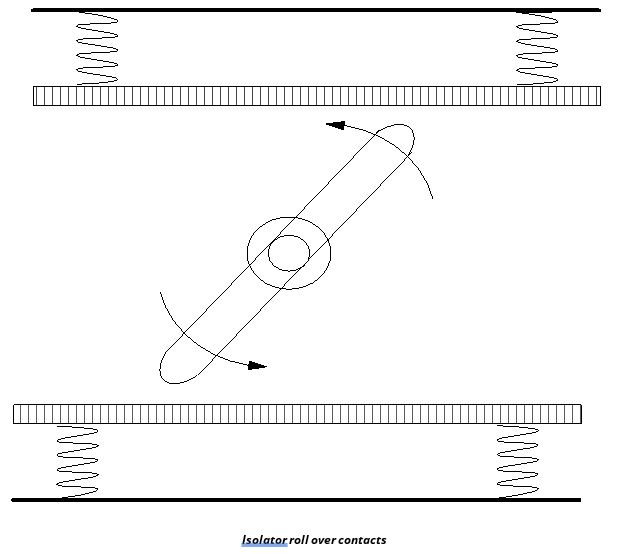 Isolators are simple devices with contacts invariably comprising a moving blade going into two parallel fixed contact faces. The fixed contact faces are usually made up of a number of spring-loaded fingers. The best isolators employ a roll-over action at the end of the closing operation which forces the moving blade into contact with the spring-loaded fingers.

The crucial part of this arrangement is based upon the actual areas of contact.  If these areas are examined under a microscope it will be found that the apparent surface to surface contact is made up of a number of point to point contacts. The current flows along one surface through the point contacts and then along the other surface.

The current through a closed isolator is substantially flowing in opposite directions at the contact faces with a very small separation. The two parallel path situation causes the mechanical repulsion forces to be set up.

The repulsion forces attempting to move the fingers away from the blade are proportional to the current since the current is the same in each effective conductor. When a system fault occurs, the closed isolators must carry the heavy fault currents and the mechanical forces at the contacts are very large.

The spring pressure on the contact fingers and the number of fingers are the two critical features which enable an isolator to cope with its rated short time current.  If either of those features is deficient the contacts will separate and burn. The above paragraph on isolator contacts applies equally to earthing switches.